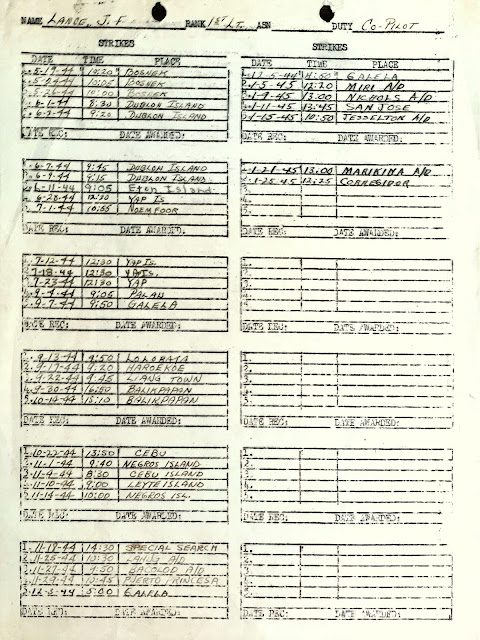 This is my father's flight log, somewhat faded over the years. The map below shows the area where his outfit operated. I know that at least part of the time he was stationed on Biak, an island just north of northwest New Guinea; and at Noemfoor, between Biak and New Guinea. The first missions were to Bosnek, on the eastern tip of Biak island. According to Don Erwin, a Facebook correspondent, his wife's grandfather flew into Bosnek (Biak) on his way to his base on Morotai. Since the first three missions in my father's log were to Bosnek, it appears that his earliest missions paved the way for Mr. Erwin's father-in-law's later journey to his primary base of operations.

Most of my father's missions were to places that are so small they do not seem to show up on most maps. A notable exception is Balikpapan, the oil depot on the east coast of Borneo. Note also that on 11/18/44 my father recorded a "Special Search," which was the fruitless attempt to find his missing comrades after his plane and its crew disappeared without a trace. 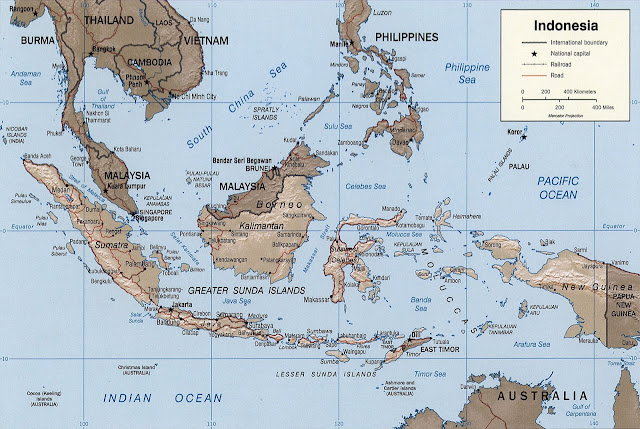 Below is my transcription of my father's Flight Log:

Note: A/D is short for Air Drome, or Airfield

About this Online Journal

My father, John F. (Johner) Lance, was in graduate school when the Japanese struck Pearl Harbor on December 7, 1941. Like many men his age, he very soon enlisted in the Army Air Corps and prepared to risk his life to defend his country.  After a brief stint in air photo interpretation, he went to pilot school and earned his wings in 1942. Later that year he married Kathryn (Kate) Haisley, a classmate from the Texas School of Mines. Their first daughter, Kathryn (me!), was born in 1943. In 1944 Johner was sent to the South Pacific Theater with the 13th Air Force.

When he arrived in the South Pacific, Johner was 27 years old, an age that to me now--in early old age--seems painfully young. When I was that same age I was single and had just begun an adventure in New York City, where I lived a bohemian and relatively carefree life in search of a writing career. A generation earlier, Johner--already responsible for a wife and child--had embarked on a very different sort of adventure, an urgent one of life and death that would help preserve his country's freedom. While I learned the ins and outs of the publishing world, Johner at the same age learned the rigors of co-piloting a B-24 on long missions, dodging flak and never knowing if he would return from a mission alive.

For nearly a year, Johner flew dozens of missions, any one of which could have meant his death, though some were more perilous than others.  Somehow he survived, though most of the crewmen in his immediate outfit did not. He returned home in 1945, and finished his education on the GI Bill, earning a PhD in paleontology from Cal Tech.


I was around two years old the first time I saw Johner (I had been an infant when he went to war). To me, my "Daddy" was a photograph on the piano.

Throughout the years I was growing up, Johner never mentioned the war, which I have learned was very common for the men who had fought in it. It was only toward the end of his life that he began to tell me about some of the things he had been through. He was always an excellent raconteur, and the stories were alternately funny and horrifying. I asked him if I could tape these conversations, and he agreed. After he died, I edited them and eventually, with the encouragement of aviation writer Robert F. Dorr, put them together into what became a short book.

I never realized until after I had worked on editing the book and then discussing it with other people after they had read it what a horrifying young adulthood my father had experienced. And how carefully he had kept all of that horror hidden.

In this journal, I want to share some more of Johner's war stories--not taped this time, but things I remember that did not make it into the book. There were a lot of facets to my father beyond his war experience, and I want to talk about some of them too. I also want to share here some stories I have heard from other members of my father’s generation and their descendants. I intend to write about many other things as well: the contrasts between World War II and the Vietnam War, the differences between my father's and my generations, paleontology and my father’s place in it, and the ways I've come to appreciate all of these things as I grow old. If you would like to write a guest post on any similar topics, or contribute something else, such as photos or flight logs; if there is something you would particularly like me to cover here, please let me know in the comments or email me at the link in the left-hand sidebar. I welcome all corrections of technical and historical detail, and hope to hear from many of you.